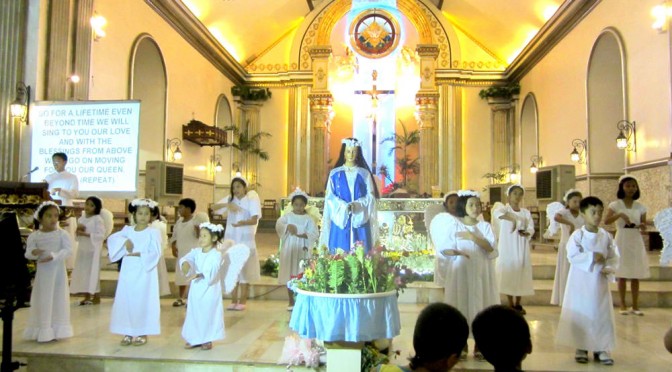 It is during our Catechism classes (particularly for those who have attended one) that we’ve learned about the basics of our Christian faith, specifically about Jesus Christ and the Blessed Mother. The first time I attended a Catechism class was held inside a church and organized by the parish community in a small humble town where I came from. I was about 6  or 7 years old then. It was summer time and the kids were taking their month-long school break, so it was an opportunity for our parish to teach catechism on Saturdays for the entire month of May. Being a pious person, my mother encouraged all of her girls to attend the said catechism class. My older sisters and I were really excited to be included in the said class as we thought there would be a chance for us to play with our friends thereafter.

Apart from learning new things, the said catechism class turned out to be very entertaining and productive particularly during the month of May, as it is also the month dedicated to the Blessed Virgin Mary. After class, the catechist would invite us to the garden side of the church called “Mary’s Garden”, where a statue of the Blessed Virgin Mary stands. The said statue was quite different because Our Lady wore a crown of flowers. It was the time when the catechist told us about the association of the Blessed Mother with the month of May, that the “May Flowers” symbolizes the Blessed Mother as the Queen of Heavenly Gardens!

My mother was eagerly excited preparing our white dresses and the home-made flower garlands to be placed around our heads and which we will be used during the last day of May, the main event of the celebration. After the Holy Mass, we would carry small baskets with some cut flowers or petals, sprinkling them while walking to the altar, wearing our simple yet decent white dresses, all for Mama Mary. The parishioners would also bring flowers for offering in honor of the Blessed Mother. This is known as “Alay sa Birhen”. Going home, everyone got small brown paper bags filled with goodies distributed by one of the donors, and just like kids we enjoyed opening the bags of candies and cookies. That was the most exciting part of all!

This is the reason why these memories of a humble celebration of “Flores de Mayo” in our home town are still vivid in my mind. There was also a Santacruzan celebration but the highlight of the event was the beautiful image of the Blessed Mother placed in a decorated carriage accompanied by the family of the Hermana Mayor and other Marian organizations and with the parishioners singing related Marian songs.

Throughout the decades however, the Flores de Mayo/Santacruzan festivity continues to evolve. In these modern times, there have been major transformation in the celebration of Flores de Mayo. Nowadays, the focus appeared to be more geared towards the “Santacruzan” celebration which is the parade of beautiful ladies or the so-called “Sagalas” emulating the real “Queens” of medieval times wearing their elegant expensive costumes and with good-looking men escorting them. Seemingly, the main highlight of the event is no longer the Holy Mass and the flower offering but the parade of good looking men, women or even gay people, as if people are watching a beauty pageant! As a matter of fact, large government and private offices as well as commercial/mall establishments are organizing similar events and would even invite famous celebrities and beauty queens to elicit more crowd for commercial and tourism purposes. It has also been observed that some people would go to church not necessarily to attend related religious activities (Holy Mass, Recitation of the Holy Rosary, etc.) but to watch the parade and take photos of the beautiful participants for their social media accounts, downplaying the real essence of the Flores de Mayo, the main focus of which is the Blessed Mother. In fact, some spectators start to disperse after watching the participants of “Santacruzan”, forgetting that the carroza (or carriage) of the Blessed Mother is usually at the tail end of the procession.

We would understand if there are calls from the Church reminding its parishioners to be mindful of the original intent of the Flores de Mayo festivity and for them to maintain “sacredness and dignity” during the said celebration. We are advised to celebrate the Flores de Mayo/Santacruzan “in a simple manner”, excluding the “worldly considerations”, and “extravagance and style”. The clergy emphasized that “everyone is welcome to participate spiritually, regardless of gender or sexual orientation” and “express their love for the Blessed Mother”.

It was further emphasized that the Flores de Mayo and Santacruzan should serve as an opportunity for priests and other parish communities to teach catechism, particularly on the devotion to the Blessed Mother. As such, said external and worldly gestures that would weaken and negatively affect the true essence of these festivities should as much as possible be avoided.

I share the same observations of some of the clergymen and I would like to echo their call for each and every Catholic including priests and other religious to “reorient” the said events to their primary goal: That these events have religious roots specifically to honor the Blessed Virgin Mary and that the said religious significance should not be influenced by the world of consumerism, modern ideologies, and non-religious subjects.

While there is nothing wrong with having fun and merriment during the May festivities, what is more important is for us to bear in mind that the center of Flores de Mayo and Santacruzan is the Blessed Mother and that should not be taken for granted.

This year, Jacinta (10) and Francisco (11), the kids who witnessed the apparition of the Blessed Mother, known as Our Lady of Fatima will be canonized as saints this year by Pope Francis. 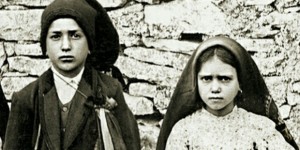 They will be the youngest saints ever in the history of the Catholic church. Our Lady asked these young kids to recite the Rosary daily and to make sacrifices, offering them for the conversion of sinners. Despite their being young, these children offered some sacrifices to Our Lady such as giving their lunch to beggars and some mortification.

I hope and pray that our fruitful participation in the said celebrations will help develop our spiritual growth, specifically our real interior devotion to the Blessed Virgin Mary who is the model of our Catholic faith and charity and enhance our genuine help to poor and disadvantaged neighbors. Amen.

Happy Mary’s month to all!  Let’s take time to pray the Holy Rosary.

We, the Bosconians, help each other to pursue our dreams with trust in God and believe in ourselves.

Loving God will always be in Bosconians heart.

So let us build our Alma Mater, School of Saint John Bosco, with the spirit of our Lord Jesus Christ.

Let us love each other